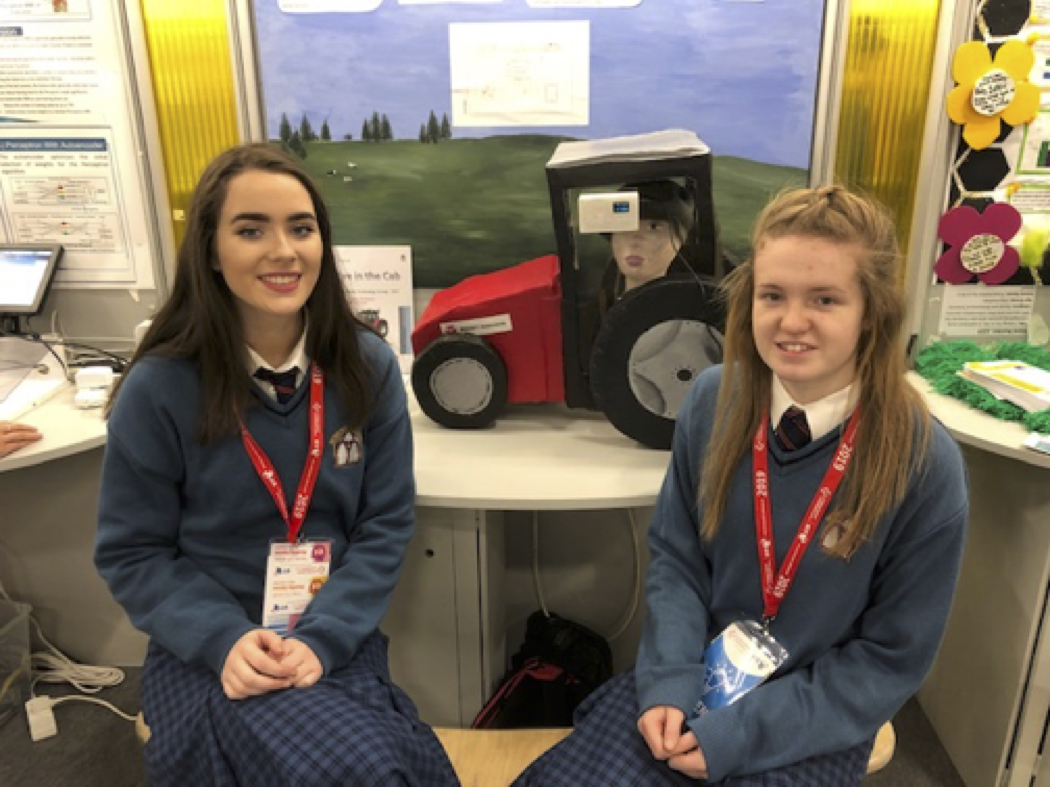 Details:
Agriculture is a huge part of the life of the people of Ireland. The fatality rate in agriculture is far higher than any other economic sector. A large proportion of all fatal workplace accidents occur in agriculture, even though only a small number of people are employed in farming. Accidents involving tractors were the single biggest contributor -30% of accidents involved in the farming /agricultural sector between 2008 & 2017. Of those, there was 43 deaths or 67% of the accidents where farmers were crushed by their vehicle after it toppled over.

Using an electronic “gyro”, we have built a device that recognises the angle of the tractor, and with the aid of an internal siren, it will alert the driver once a tractor has reached a 350 tilt. The device will also alert the drivers’ ICE (in case of emergency) contact on their mobile phone via a SIM800L, once the vehicle has reached or exceeded 400 from normal. The “Eye in the Cab” device can be affixed to the inside of the cab via velcro. 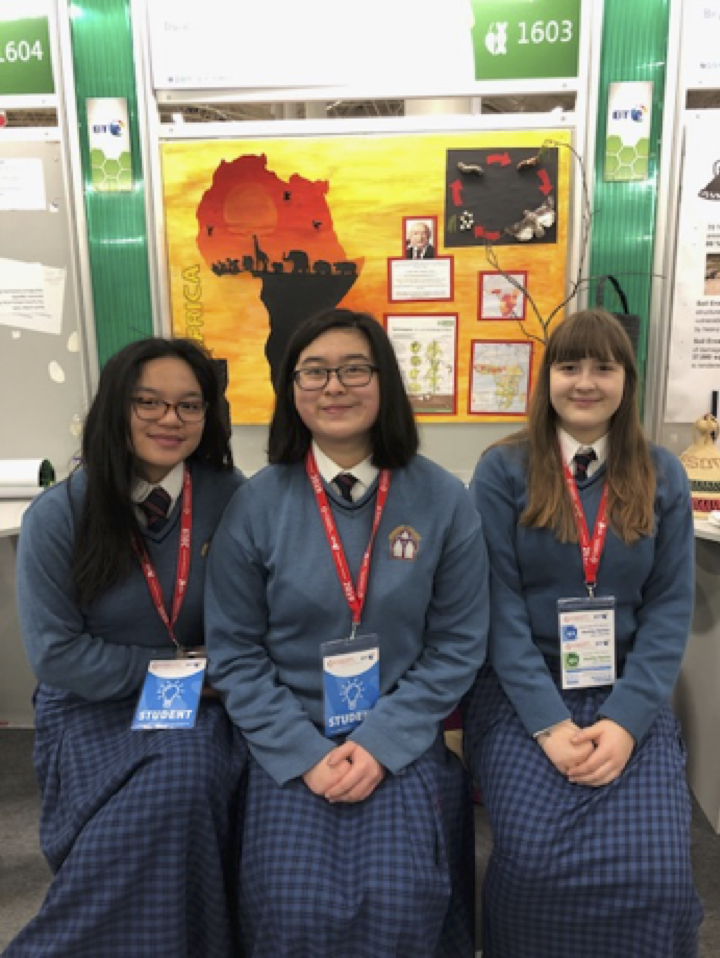 Details:
Anyone with a knowledge of agriculture in Africa has heard of the fall armyworm (FAW), a pervasive agricultural pest native to South and Central America that has ruthlessly worked its way across nearly the whole of the continent, after arriving in West Africa in early 2016 and making its way south of the Sahara and into Malawi by December of that same year.

FAW has spread quickly due to its short reproductive cycle and ability to travel long distances quickly in the adult (moth) stage.

We have designed two devices that Malawian farmers can place at the base of their crops, the first is designed around “no technology” made from 500ml plastic bottles, which is inverted and has specially cut out sections. Placing raw sugar cane in the base will attract adult moths to lay their larvae inside the bottle. We have painted panels of the device in order to increase the internal temperature of the device in an effort to further attract the moths.

We have cut serrated edges into the external features of the bottle which will ensure the FAW will injure itself if it attempts to crawl out, farmers will be able to collect the larvae and feed them to their chickens or place them in a bucket of water before reusing the device. 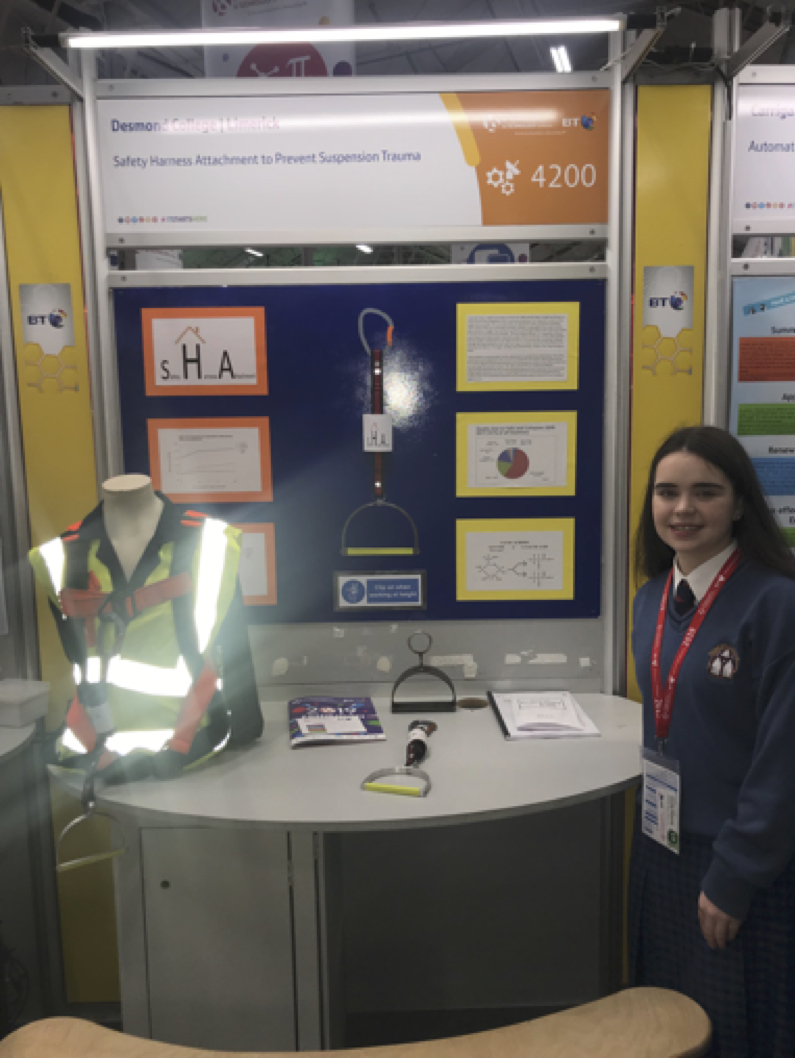 It is constructed of lightweight aluminium and used a strap designed for use in mountaineering along with a carabiner can be attached/detached from the fixation point on the front of any standard safety harness. 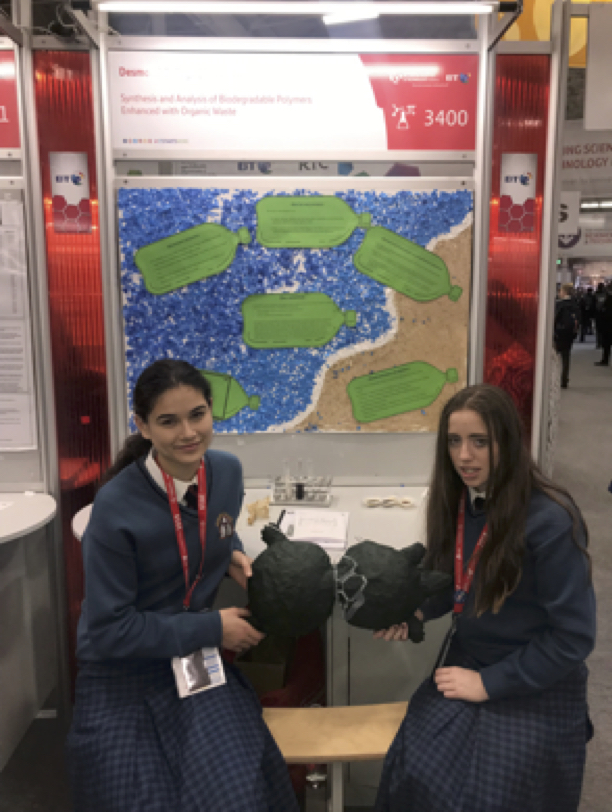 Details:
Currently, it is estimated that the worldwide production of petroleum based plastic is around 100 million tons annually, and that seven million barrels of petroleum are required per day to produce that plastic. It is estimated that 80% of sea turtles and roughly 70% of seabirds are ingesting plastic, which clogs their digestive systems.

As a result, some one million birds and 100,000 marine mammals and sea turtles die each year due to plastic-related incidents.

We made an alternative plastic using organic materials. Our plan was to test the new type of plastic for strength and its ability to dissolve in water, we have made several items out of our plastic e.g. drinking straw and six-pack rings.

Initially, we made plastic with complete organic materials, such as corn-starch, vinegar, water and glycerin. After testing this we added agar in an effort to make the plastic stronger. We have now added keratin derived from the feather of chickens, which is high in protein that will increase the tensile strength. 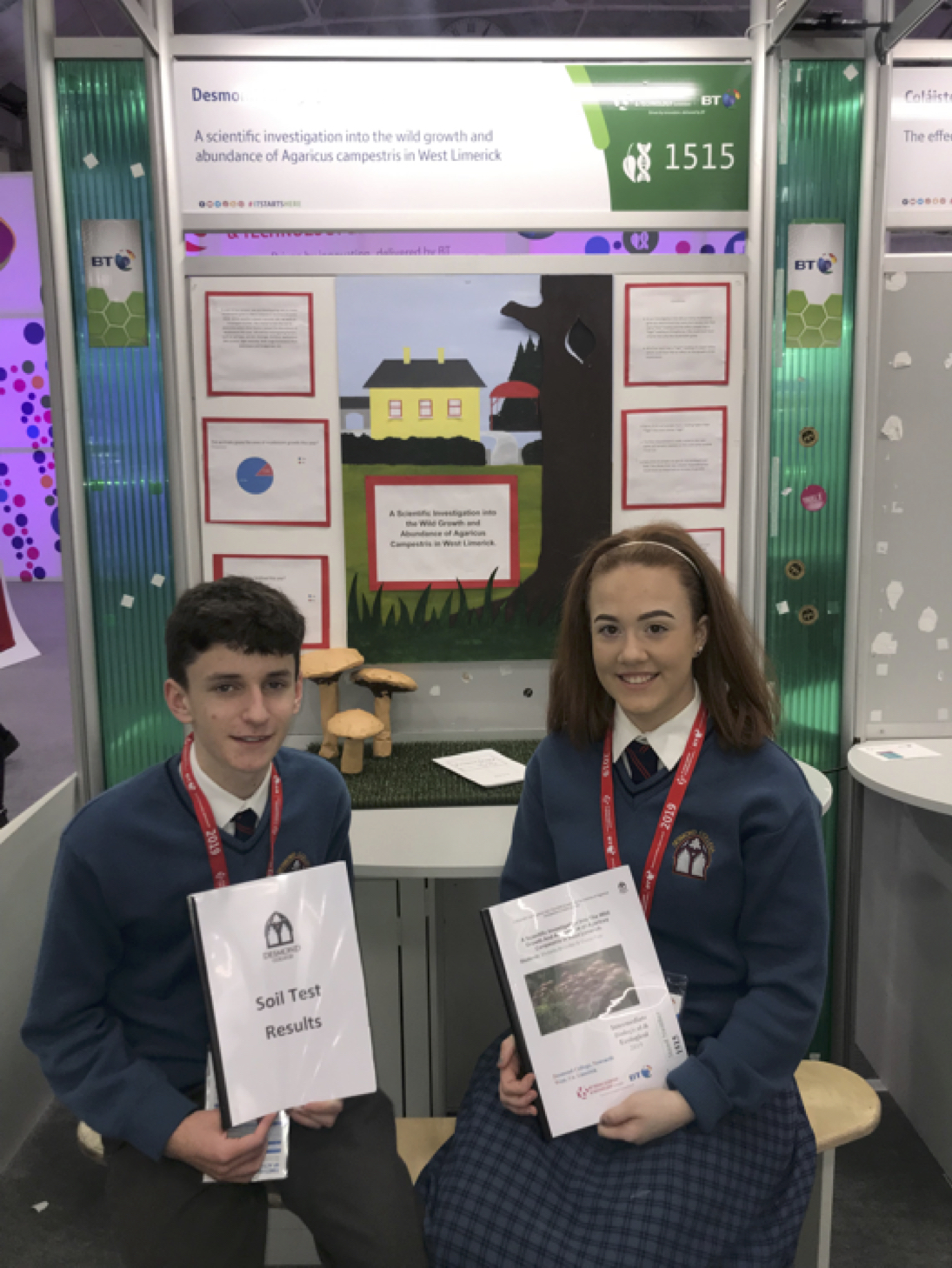 Details:
Conor Fox and Victoria Brouder’s project is a scientific investigation into the wild growth of and abundance of Agaricus campestris (wild field mushrooms) in West Limerick. They are in the intermediate biological & Ecological section.

As part of their BTYSE project, they are investigating why there was an abundance of mushrooms in West Limerick in the Autumn/Summer 2018. While weather played a pivotal role, they wished to investigate further.

They tested the soil to see if anything else was a contributing factor in the growth of these mushrooms. They tested the soil for PH levels, nutrient ions, organic matter content, fertilizer application, field usage and distance from waterways. They gathered 8 soil samples from West Limerick farmers, who also kindly filled-out a survey including questions such as
‘did you notice an increase in the growth of mushrooms?’,
‘did you fertilize the land where the sample was taken from?’,
‘where the soil sample was taken, was it in a shaded area?’.

They then got the help of Norma McKenna from Southern Scientific Farranfore who aided them in their testing.

In conclusion, when they analyzed the results they found that every test except one sample had a low reading of phosphorus and all the other samples were high, this could be a factor why the mushrooms grew. All of their tests had a high reading of Copper which could have also been a factor.

In their survey, 87.5% farmers fertilized their land and 12.5% didn’t. Weather also played a vital role in the wild growth of the mushrooms as having a snowfall in March followed by a very hot summer is not usual for us. The conditions necessary for germination are water oxygen and warmth. The snowfall causing the ground to become very wet and the heat off the sun both provided the conditions that were necessary for germination.

So to conclude their research, they found that the weather, the low phosphorus, fertilizer application and the high sulfur all played vital roles in the wild growth and abundance of Agaricus campestris in west Limerick in the summer/autumn of 2018.
A big thank you also to Mr Shiels for helping with the display. 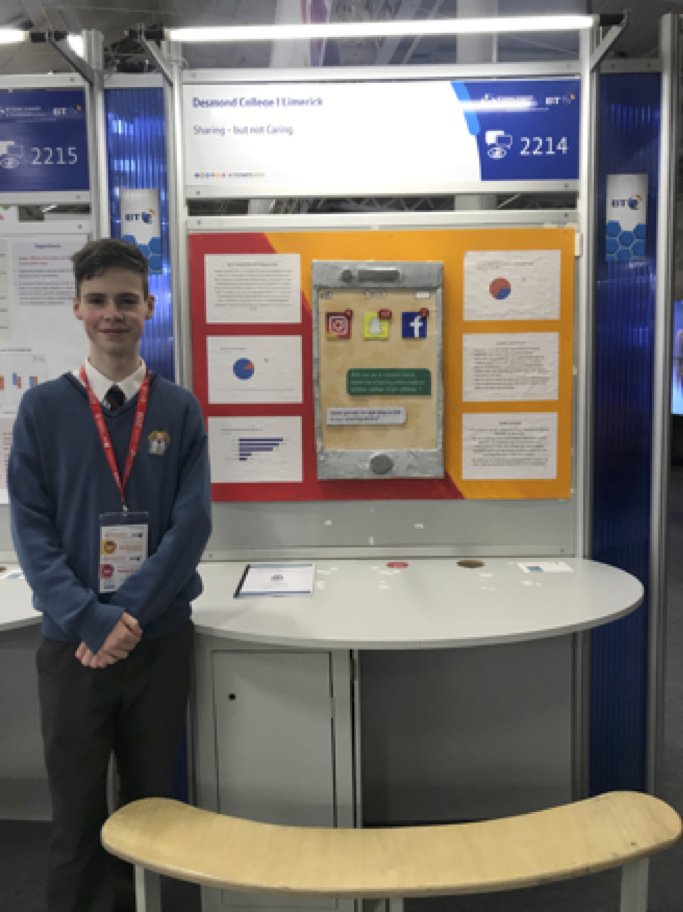 Details:
I myself post way too much information on my Instagram and Snapchat. And I’m certain I can’t be the only person out of the millions of people that use social media that over share personal details about themselves.

This spurred me on to find out if people’s attitudes towards social media and how we use it. I did some research on different parts of my project and found out more information on social media and our sharing habits. I also created a survey and analysed my findings I found that the majority of the population surveyed are on social media, the most popular media platform is snapchat.

67.5% of the population surveyed are not friends with everyone on their social media accounts in real life.
65.4% of the population said they share their birthday online and a lot of people share their location online.
I also spoke to some of my fellow students and teachers who agreed that we are sharing too much online, it was interesting to see the difference between peoples online and offline sharing attitudes with many students being far more willing to share thoughts and information online rather than face to face with their peers or family. 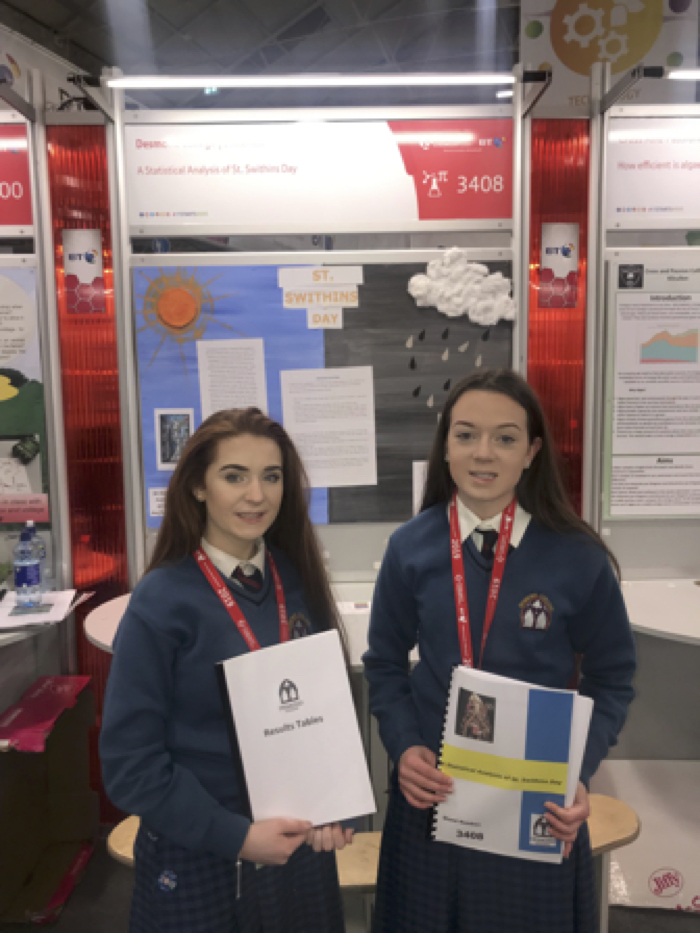 We analysed the amount of precipitation across 5 weather stations in the North, South, East, West and Midlands of Ireland. We tabulised, analysed and graphed our results.

In conclusion for the data we analysed, there has been no occurrence reaching 40 days. We would like to thank Mr Culhane who helped us with our display. 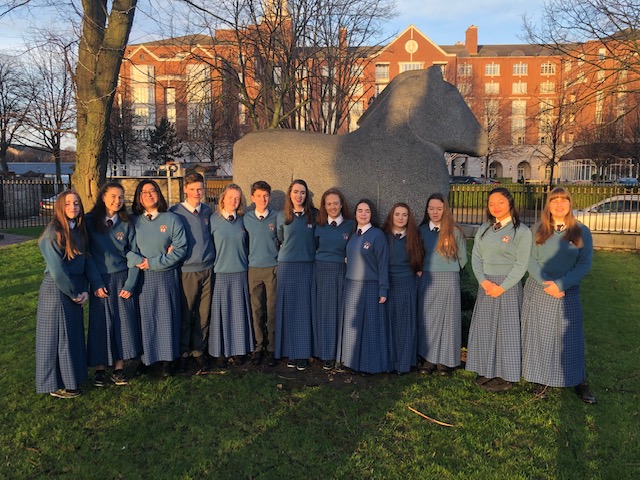